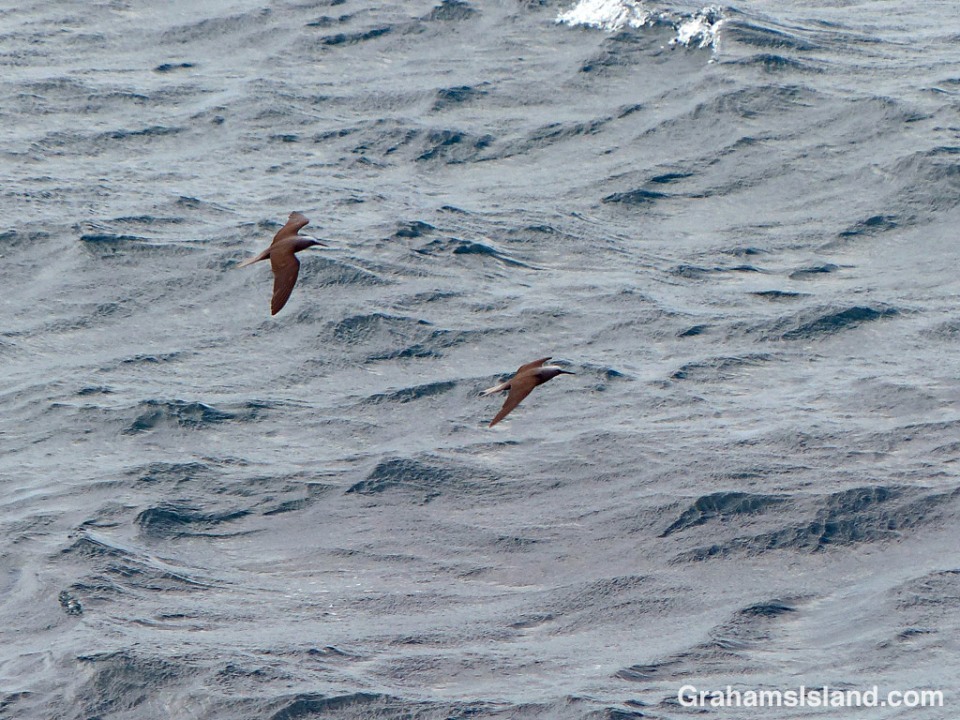 Photographing birds is always a challenge for me, especially when they’re in flight. Hawaiian noddies are tricky because they tend to skim the water as they fly along the coast. When I do see them, they’re usually as close as they’re going to get and, by the time I have my camera organized, the best I can hope for is a blurry photo of some tail feathers.

What was unusual on this day was that, while I saw the noddy in about the same relative position as I had other times, it was higher up, dipping below the cliff and then climbing up again. As it was heading into the wind, it was making slow progress and I thought I had a chance. But each time I was about to get the bird in shot and in focus, it would slide away again. However, each time it reappeared, it got closer to where I was.

Where I was standing, the cliff dipped toward me, and when the bird swooped in to that recess (still evading my camera) I felt sure I would be able to capture it when it flew out again. I was ready, I was focused, but no bird. I was pretty sure it hadn’t sneaked by, out of sight. Then I realized that the chances were I’d stumbled on the bird’s roost. I couldn’t see the cliff face so I waited and a few minutes later two noddies flew out, circled around, and returned to the cliff.

Eventually, four birds came out, and while they looked a similar size, I suspect two of them were chicks that were about ready for independent life. It was still a challenge getting the birds in the frame, and I didn’t help myself by switching my focus from one bird to thinking I could get all four in shot, and back again.

In the end, I was happy to have a few decent photos and more happy to have had the time just watching them circling and swooping, dipping and diving, before swinging back to their roost.