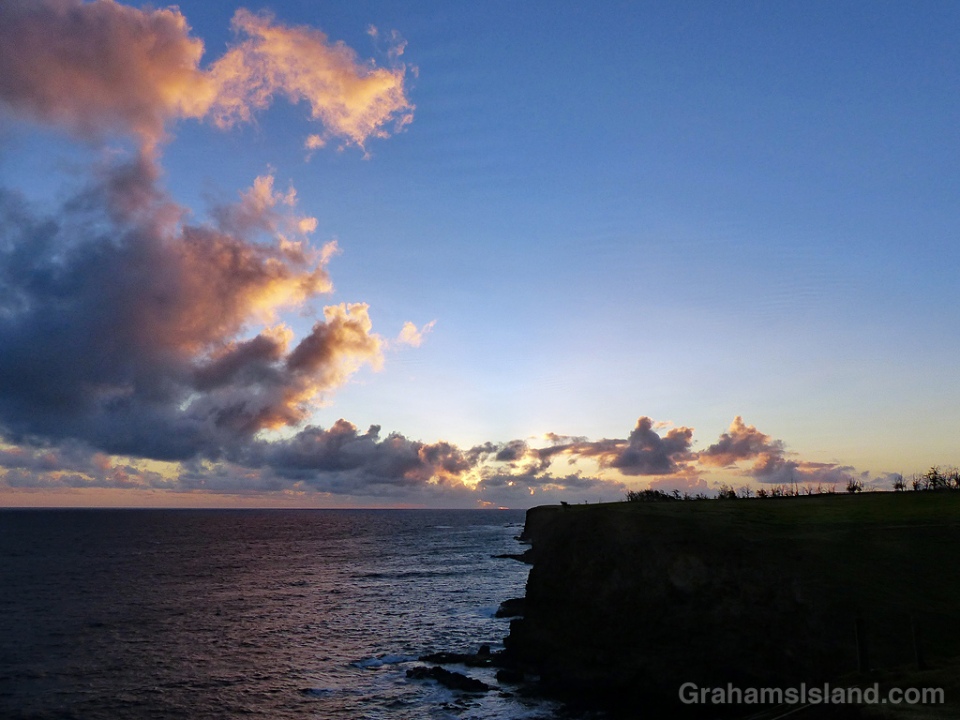 In keeping with my rigorous commitment to staying abreast of current events, it was only on the day before the event that I realized this week’s eclipse of the sun would be visible in Hawaii. Despite it being only be a partial eclipse here, I thought I should make the effort to check it out.

The first issue I had was that I had neither proper viewing glasses, nor the correct filters for my camera. But I thought that, since the eclipse would already be underway at sunrise, I might be able to get a decent photo or two at that moment.

I set my alarm and, when it went off at 5:15 on the big day, I got up and headed out. It was a promising, clear sky morning as I drove to Upolu Point, the northernmost tip of the Big Island. I parked my car and walked up a grassy slope to the headland which I thought would be a good spot for photos. That’s where I saw a band of clouds on the horizon. Maybe it would break up. Maybe it would blow over. Maybe a gap in the clouds would magically appear.

None of those things happened. This was the scene right around sunrise. The sun was eclipsed by the moon, but they were both eclipsed by the clouds. A while later the sun broke free, but by then it was too late for me, with my gear, to get an image. Still, it was a beautiful morning for a walk and not too late to head home for coffee. 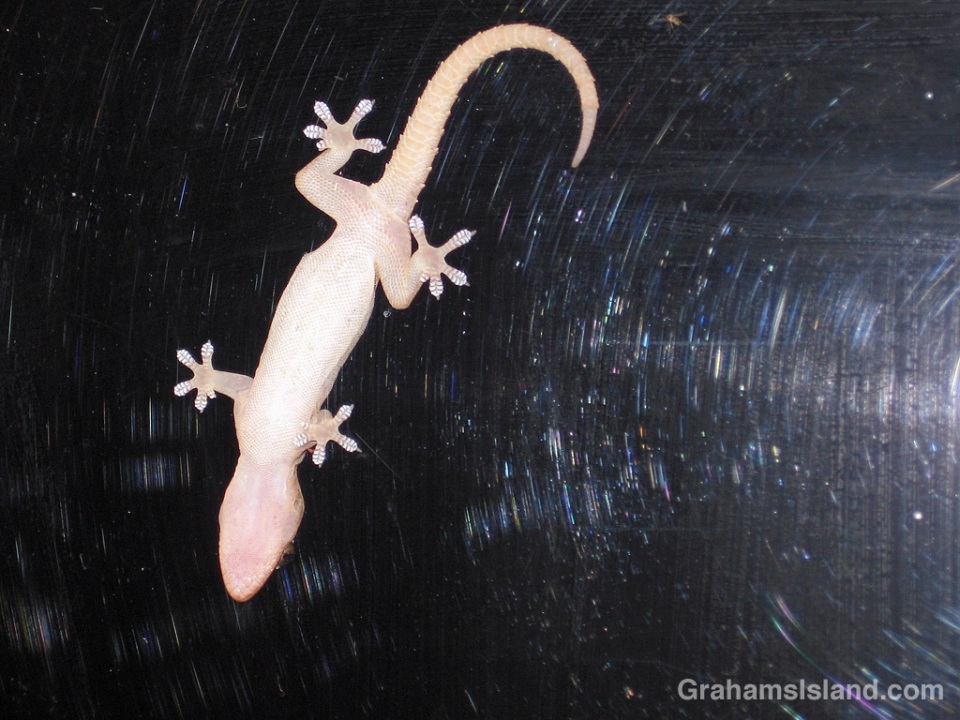 I’m constantly running in and out of the house because I’ve been distracted by something going on in the world of nature. I noticed this gecko on the outside of a window one night and rushed to get my camera. I particularly like the details of the underside of its feet, those miraculous pads that enable it to scoot around on any surface – up, down, or upside down.

I think this is a house gecko, but it could be a mourning gecko.

The Big Island’s ‘Ōma‘o is one of two endemic thrushes left in Hawaii. The other is on Kaua‘i. There used to be distinct species on each of the islands, but the others are extinct. These birds live mostly on the wetter eastern slopes of Mauna Kea and Mauna Loa. This one was seen on the Pu’u O’o Trail off Saddle Road, which is probably near the westernmost limit of its range.

Waiting for sunset at the top of Mauna Kea, there are many distractions – shiny telescopes, other sunset watchers, pillowed clouds, and plummeting temperatures. By the time I returned to the car I was ready to turn up the heat, a rare opportunity in Hawaii.

The telescopes are from left: Suburu Telescope, The two telescopes of the W. M. Keck Observatory, and NASA Infrared Telescope Facility.

A goat scrambles over the lava alongside the Pu’u O’o trail. Here, it’s probably transiting between kipukas, where there’s a good deal of forage growing, but goats seem to do fine in even the most inhospitable places on the island. 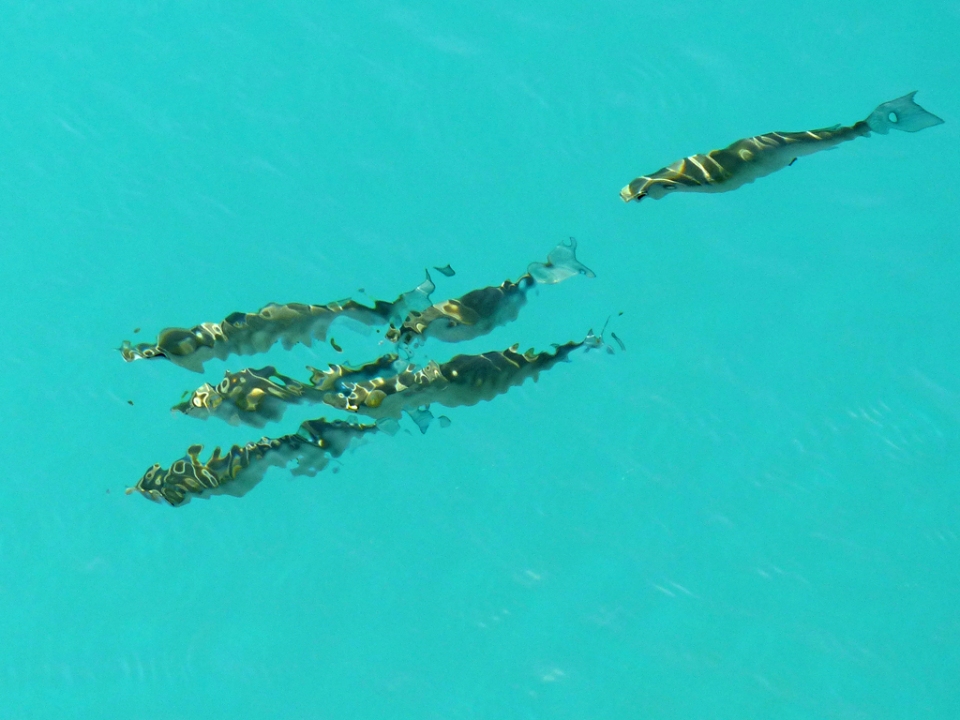 These little fish were swimming in Kiholo Bay. Freshwater springs bubble into the water here and give it its milky coloring. 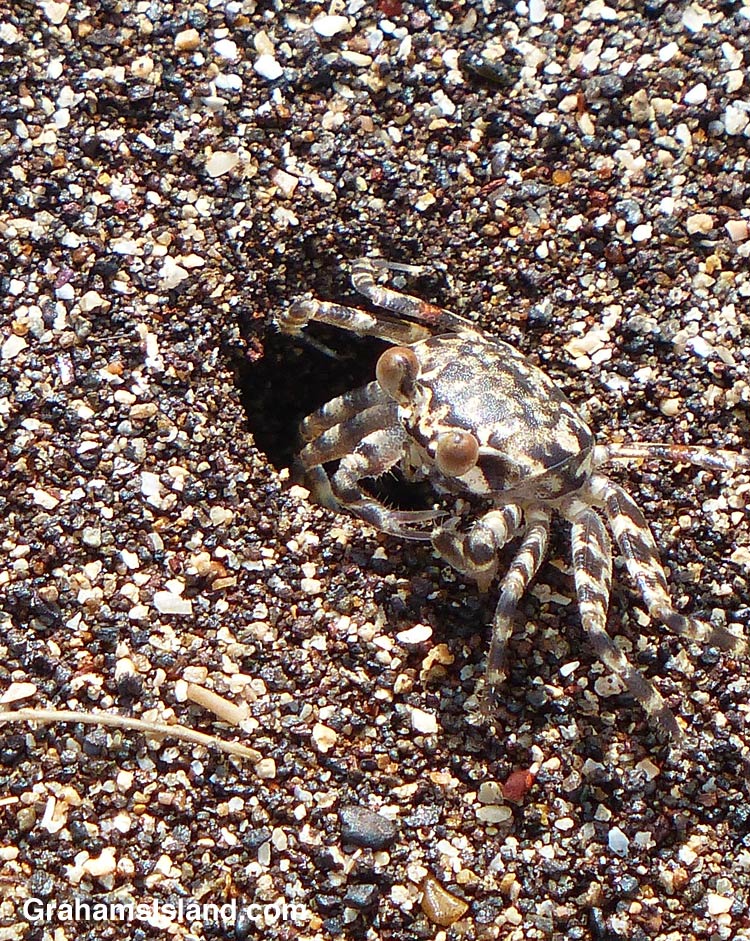 This week’s WordPress photo challenge seeks distractions and for me, one thing that gets my attention is movement. I see something out of the corner of my eye and I wonder what it was, then try to find out.

In this instance, I was crossing a beach when I noticed bits of it get up and scurry away. Closer inspection revealed several of these pallid ghost crabs. They’re beautifully camouflaged, but if that cover is blown, they zip away, and I do mean zip. They take off like Usain Bolt, then stop and disappear again.

If that doesn’t work, say because some annoying individual with a camera stays hot on the trail, the crab will head for its burrow, perch on the edge, and at the slightest unwelcome movement, disappear from view. 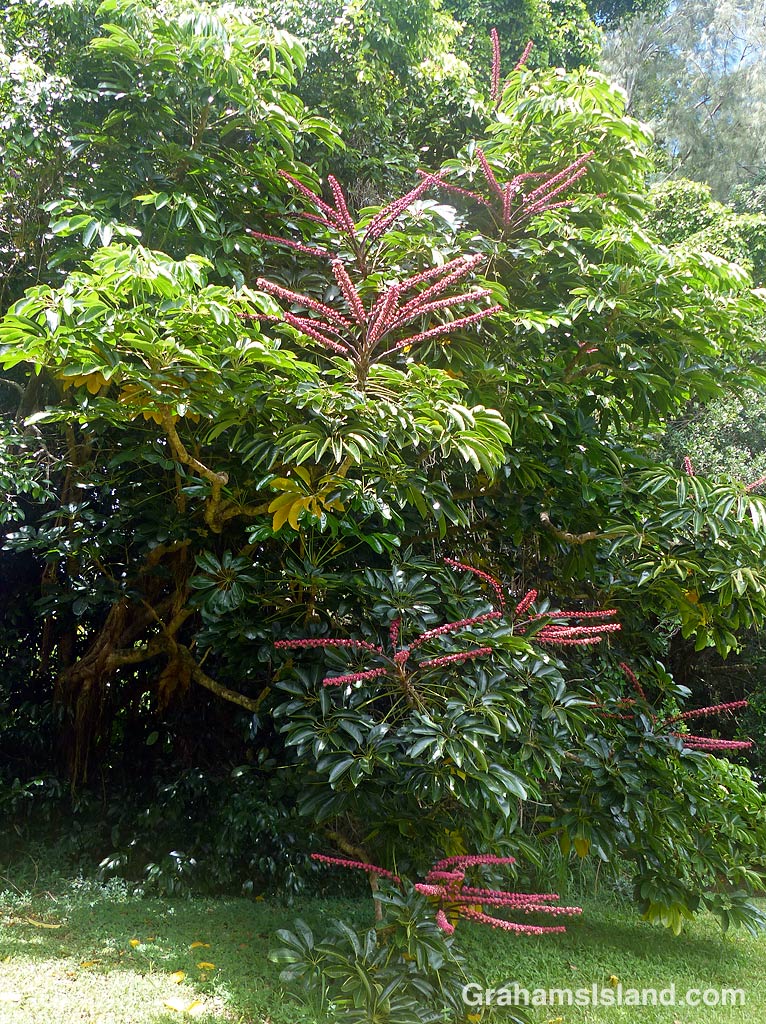 The octopus tree (Schefflera actinophylla) is also known as the he’e tree in Hawaii. With its long arms of red flowers it’s easy to see how it got its name.