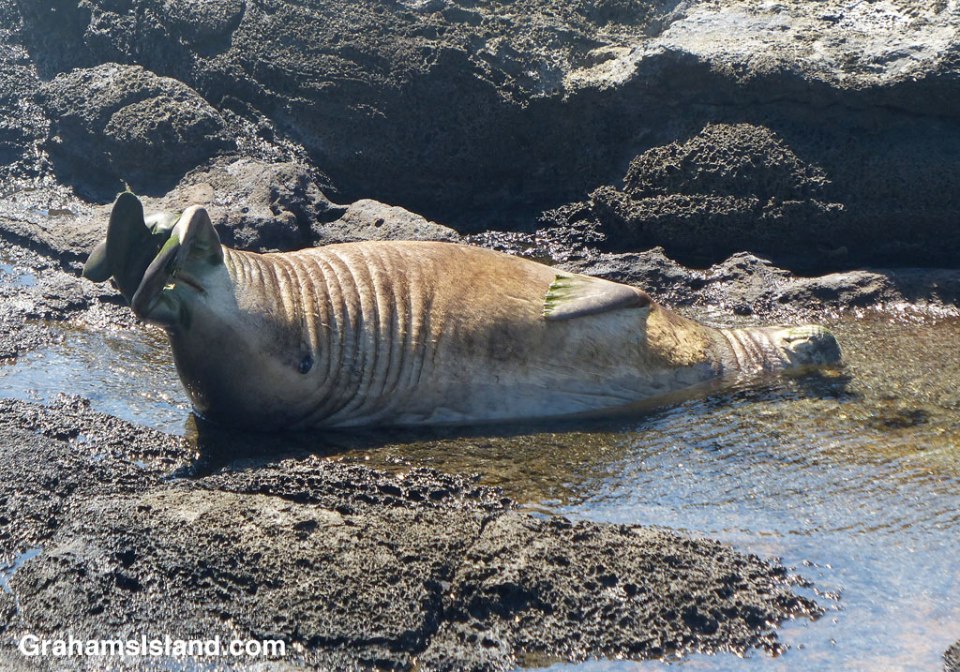 This is I05 who was the subject one of my first posts on this blog. In that photo he was resting. Here we see him doing calisthenics. Ha, just kidding. This was actually a brief position adjustment between two lengthy spells of resting.

Monk seals, though few in number, often haul out to rest around the island. It’s important not to get too close while they do so. Besides being illegal, disturbing their resting periods can be stressful and adversely affect their health. Also, if they get used to humans being close by, it’s only a matter of time before there’s an encounter where someone gets bitten. This is likely to result in the animal having to be relocated to the uninhabited northwestern islands.

This was the first time I’ve seen I05 in almost 5 months so it was good to see him again and still in such good shape. The green tinge to his skin around his nose and flippers is algae and he will likely molt in the none too distant future. Molting is usually an annual occurrence, during which he’ll shed the top layer of his skin and fur.

I05 is the brother of Waimanu and was the uncle of Elua, the subject of this post. I’m not sure why, but as far as I know I05 was never given a name. I confess that I call him Igor, though I can’t remember why.

For more information about Hawaiian monk seals, go to www.pifsc.noaa.gov/hawaiian_monk_seal/ or www.marinemammalcenter.org/hawaii.