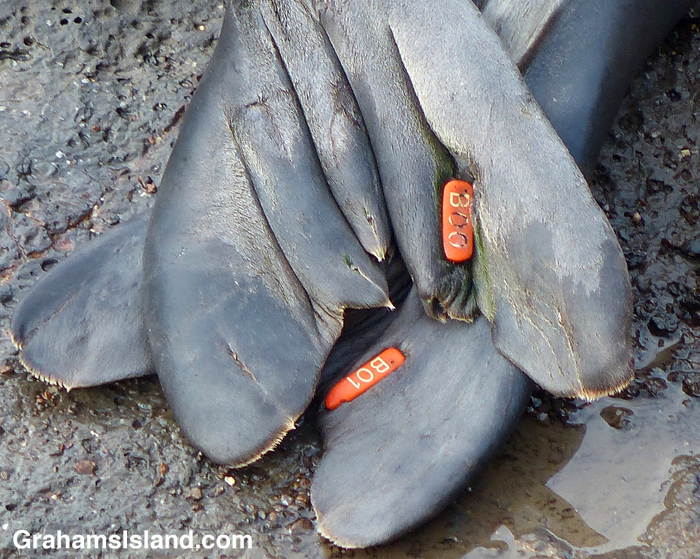 This photo is somewhat unusual, particularly for the Big Island. Outside of mothers with pups, it’s uncommon to see two monk seals together, much less relaxing in the same tide pool. One reason is the scarcity of seals. There are 1,000 or so in the remote northwest islands, but only about 200 around the main Hawaiian islands. Of those 200, there may be as few as 5 living around the Big Island.

One of those is IO5, a 7-year-old male, who I’ve posted about before (here, here, and here). He’s the seal I see most. In this photo, IO5 is in the foreground in what I can only describe as a characteristic pose. He’s resting, which is what monk seals do when they haul out on land.

The other seal was new to me so I was keen to identify it. There are two main means of identification. Many seals have a code bleached onto their sides. Such a mark is good for about a year until the seal molts when it sheds it’s skin. This new seal was not bleached.

The other prime method is red tags attached to the seal’s tail flippers. I moved around, trying to get a good view of the tail, but couldn’t see any tags. (I should mention here that the goal is never to disturb seals when they’re resting, so while they reclined in the tide pool, I was sneaking around on the cliff 30 feet away and another 10 to 20 feet up.) I watched for a while but this seal showed even less inclination to move than IO5. It was so still, I wondered if it was dead, but I did see a couple of twitches.

Over the next few days I saw the new seal three more times. The first time it was in a position where I couldn’t see the tail. The second time, I caught a tantalizing glimpse of red, but that told me nothing more than that the seal had been tagged. (IO5 has also been tagged, but has lost them over the years and now bears only a nubbin of one tag.) The third time I saw the new seal it was out in an open spot where I could get a great view without disturbing it. Again I could see part of the tag, but not enough to identify it. So I hung around for the best part of an hour. I got good photos both sides, of the head and tail, but still only a glimpse of a tag. During that time the seal’s only movement was a twitch of the tail, which covered the bit of tag I could see. The only good news about all this was that the seal looked in excellent shape. I didn’t see any wounds or other marks that might indicate a problem.

Finally, a full week after the first sighting, I went down to the same area again. At first, I didn’t see any seals, but I thought I’d check a low spot on the cliff for another view. About 15 feet away, stretched out on the rock, was the new seal. It was facing me but, eyes closed, remained unaware of my presence. I took a couple of photos, then climbed back up the cliff and around to where I could see the tail flippers. Eureka! The flippers were splayed in such a way that I could clearly see two tags, one in each flipper.

I sent the photos in to the NOAA Fisheries Marine Mammal Response Coordinator and a couple of days later I learned that the new seal is B00 (not sure why the other tag says B01). The seal is a 9-year-old female that was born on Kauai. In recent years she has also been seen on Molokai and Maui. I think is the first sighting for her on the Big Island. She had her first pup this year on Maui, but unfortunately it was stillborn. Perhaps her sojourn on the Big Island with IO5 will presage another pup sometime next year.

For more information about Hawaiian monk seals, go to www.pifsc.noaa.gov/hawaiian_monk_seal/ or www.marinemammalcenter.org/hawaii.