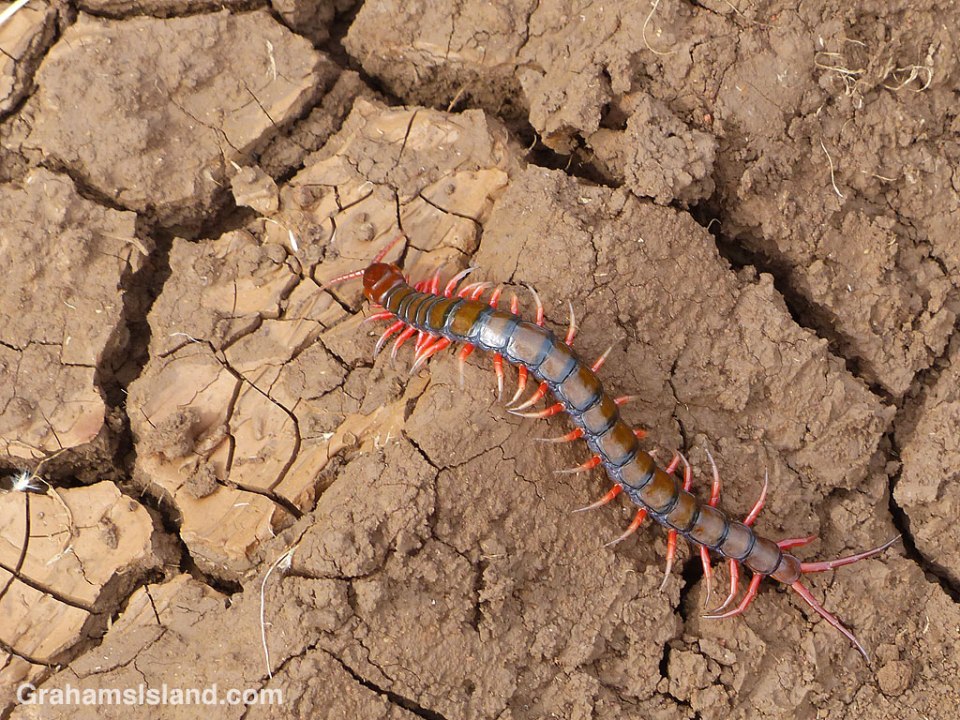 This centipede (Scolopendra subspinipes) is also known as the Vietnamese centipede, Asian forest centipede, and Chinese red-headed centipede, among other names. Some of these names are unprintable when uttered by someone who has just been bitten by one. The bite can cause extreme pain and can be dangerous if a person is allergic to the venom, but is not generally considered life-threatening.

The venom is delivered through a pair of modified legs, known as forcipules, located just behind the centipede’s head. For this reason, it’s useful to figure out which end is the head, but this isn’t always immediately apparent, as both ends have some similarity in appearance.

The centipede is the alpha creepy-crawly here in Hawaii. This one was about five inches long, but they can be much longer. (For anyone who has the nerve to read a story — and see a photo — about one of these that measured in at 14.5 inches long, click here.)

This was a good place to spot this centipede, outdoors on a dirt road. There are few worse feelings than spotting a centipede in the house, scurrying across the floor (they move fast), and disappearing into a tiny, inaccessible crack. This means that a general understanding that centipedes live in and around dwellings is replaced by the certain knowledge that there’s one in the same room.

Since most bites occur from unexpected encounters, such as when a centipede has crawled into someone’s shoe, or in a towel, or made itself comfy in a bed, when I see a centipede inside, I usually become more vigilant for a while.

I haven’t been bitten yet, but I know the chances are it won’t happen when I see a centipede, or when I’m being vigilant. It will be when I’m engrossed in something, such as writing on my computer, and I lean back and wonder, in a last moment of innocence, ‘what the heck is that tickling my neck?’ Aaaaaaargh.