I’ve posted before (here, here, here and here) about trips I’ve made to see the current lava flow from Kilauea Volcano’s Pu’u O’o vent. Lava first reached the coast on July 26, 2016 and has been pouring into the ocean ever since. However, on New Year’s Eve, much of the newly formed delta collapsed into the ocean taking with it a chunk of the older cliff. As a result, the lava tube carrying the active flow was suddenly left exposed and lava gushed out into the ocean as if from a firehose.

I was aware this was going on, but hadn’t really appreciated what it meant until this past Wednesday. Then, I read a report about the phenomenon, saw some photos, and realized this was something I had to see. Since the weather was favorable and it was early enough, I set out the same day.

After a three-hour drive and brisk hike I got to the viewing area, from the Kalapana side, around 5 p.m. These photos are from that trip. The top photo shows the firehose, lava gushing into the ocean in a constant, unwavering stream. When it hit the water, it generated a series of explosive reactions. The second photo shows the Lava Ocean tour boat nudging in toward the action as one of these explosions occurred. Below is a closer look at the stream with chunks of hot lava being hurled out into the water.

I stuck around until it got dark and then headed home – another hour-long hike and long drive – but it was so worth the effort. This was emphasized when, the next day, another cliff collapse caused the firehose to disappear from view. It might return, since the whole area is unstable, but it might also be gone for good.

I guess timing really is everything and I feel very fortunate that I was able to experience this phenomenon before it was gone.

For more information about Kilauea Volcano and it current eruption, go to hvo.wr.usgs.gov/activity/kilaueastatus.php. 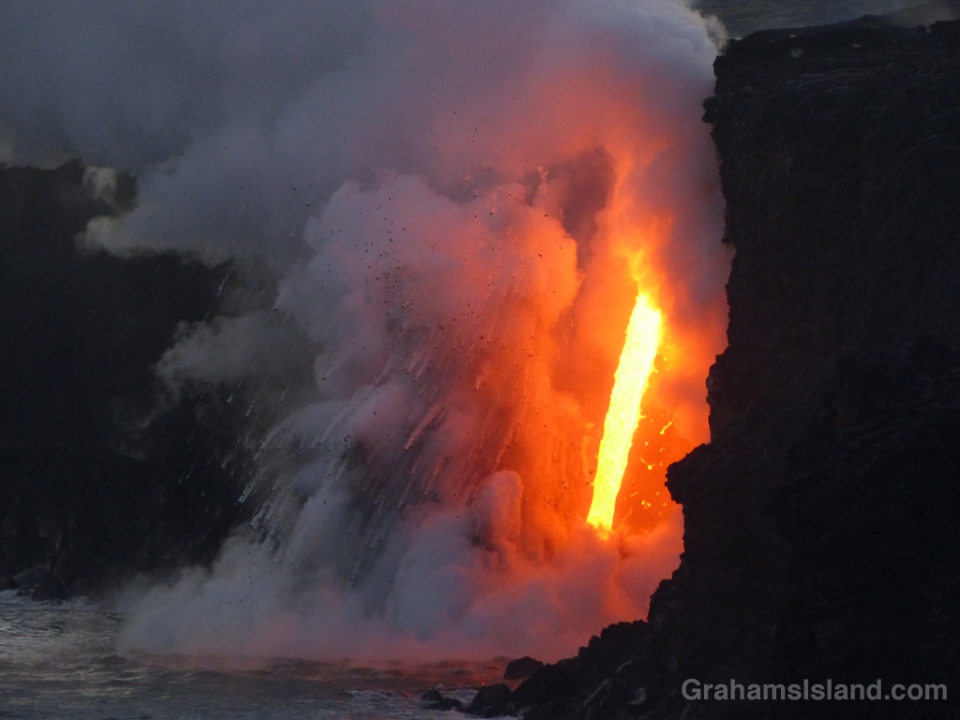