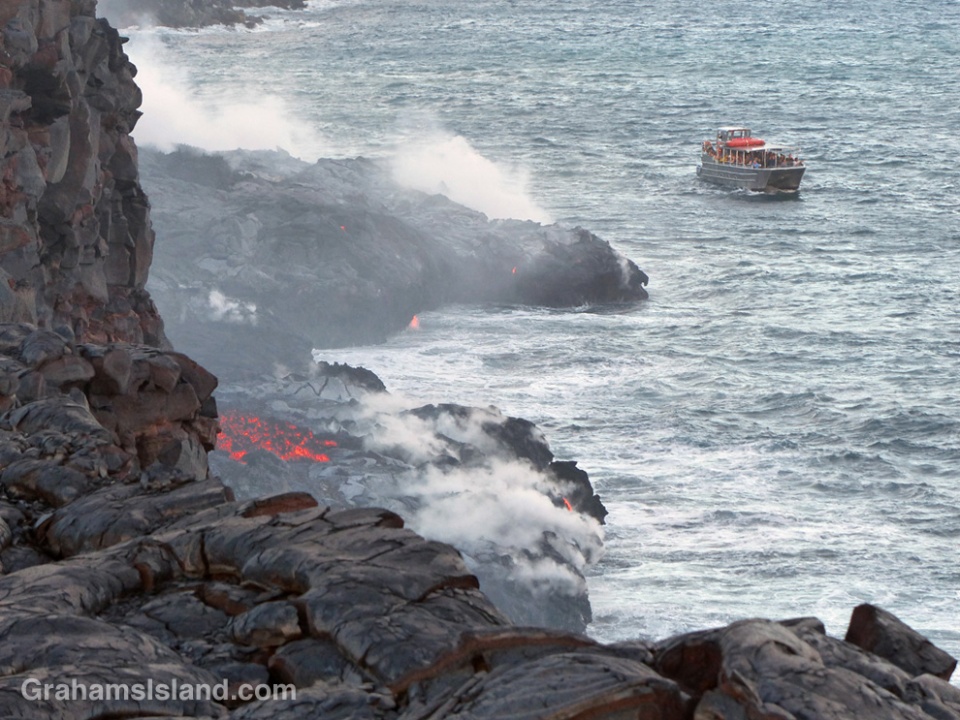 The Lava Ocean tour boat edges up to the new bench in the ocean, created by the flow. 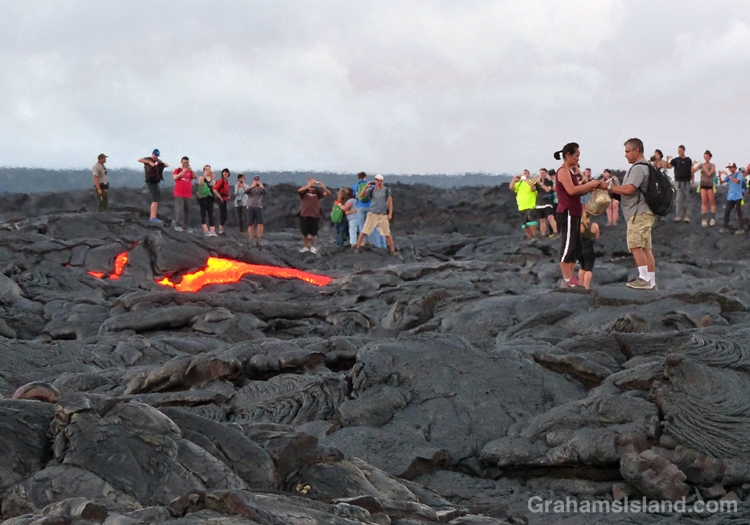 This photo was taken within a few seconds of this lava breakout beginning. The couple on the right hadn’t yet noticed it. 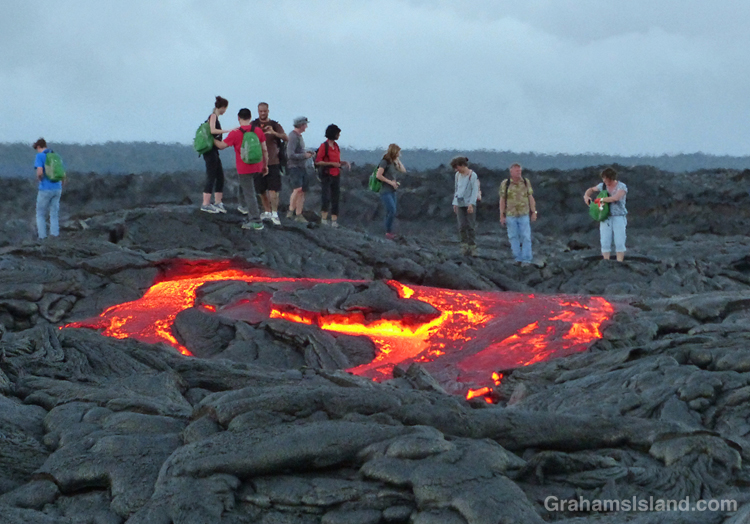 … and extends toward the water. This was about as far as it got while I was there. All these people are standing on the active flow.

Last week, I posted twice (here and here) about a boat trip to see lava entering the ocean from Kilauea Volcano’s Pu’u O’o vent. Since then the ocean entry widened dramatically to more than 700 feet. With all that activity, I thought another hike to the flow was in order. This time, instead of hiking from the viewing area at Kalapana, I decided to go through Hawaii Volcanoes National Park.

The hike starts on the coast, at the end of Chain of Craters Road. It’s about an 8.5 mile round trip, and follows the emergency gravel road constructed in 2014. While the whole area is a stark covering of old lava flows, I liked seeing ferns and the occasional shrub getting a toe hold in cracks and under ledges. And then, with late afternoon light slanting from behind and rain showers approaching from ahead, a brilliant rainbow lit up the sky.

Regarding the current flow, the USGS website notes that “the entire area presents a significant hazard to visitors.” It goes on to list dangers from toxic gasses, explosive events, and unstable ground. So it was with some surprise that when I arrived, I found the flow crawling with people. This wasn’t because it had suddenly stopped and cooled. At the edge, where it crossed the road, the red glow of active lava could be seen. I talked to one of the park rangers keeping an eye on things. He said all they could do was post signs and try and make people understand the dangers. They had roped off some areas and people just stepped over the ropes. It gave me a warm glow to know that, if someone was injured here, that person would understand it was their own fault and wouldn’t turn around and try to sue the park service for millions.

I wandered down the edge of the flow to the cliff where the new bench being formed by the lava could be seen. Then back to the road and I figured, if everyone else is doing it, it must be safe, right? Ha, ha. The thing is, standing next to the flow, the heat was significant, and stepping on to it, it got hotter still. My feet got distinctly toasty, so I took a couple of photos and turned around. A few minutes later, I happened to be looking in the direction of one of the clumps of people standing on a lump of lava. Suddenly, a river a red burst from near the base of the lump. A breakout, and a decent-sized one at that.

Naturally, the people nearest to the breakout quickly moved away from the danger. Ha, just kidding. People rushed toward the lava because, though the surface was obviously unstable and could turn to deadly, molten liquid at any moment, it probably wasn’t going to happen to the lump they stood on. Frankly, it was all a bit surreal.

Later, I saw the ranger I’d talked to earlier doing a brisk trade in fixing the detached soles of shoes – flat tires, he called them – where heat from the flow had melted the glue. As the light dimmed, numerous glowing red patches of lava showed up, speckled with white and yellow flashlights as people meandered through the dark.

It was time to go before someone out there misstepped. I had a three hour drive ahead of me and I didn’t want their screams ringing in my ears.

A rainbow rises over the road to the flow.