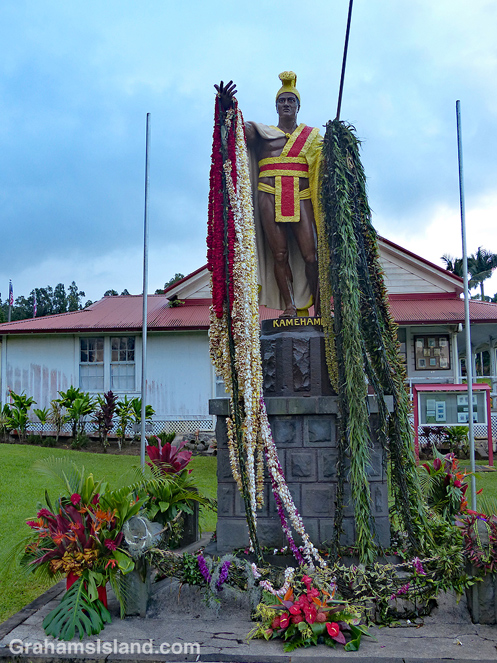 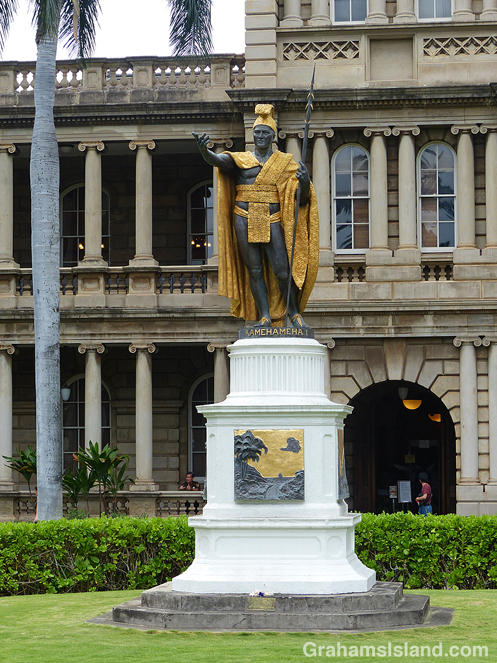 These two photos are of statues of King Kamehameha I, the king who first united the Hawaiian Islands under one leader. On top, draped in leis from last Monday’s Kamehameha Day celebrations, is the statue at Kapaau, here on the Big Island. Below is the statue in Honolulu. It sits in front of the Aliʻiōlani Hale, which housed the government of the Kingdom of Hawaiʻi and the Republic of Hawaiʻi, and is currently home to the Hawaiʻi State Supreme Court.

Back in 1878, a statue of the King was commissioned for display in Honolulu. The commission was given to American artist Thomas Ridgeway Gould, and in 1880 his plaster model was sent to Paris to be cast, before being shipped to Hawaii. Alas, it never made it. The ship transporting the statue caught fire and sank off of the Falkland Islands.

Fortunately, the statue was insured, so a replacement was ordered. While this process was underway, the original statue turned up! Salvaged by fishermen, it was sold to a British ship captain who recognized it. He, in turn, sold it to the Hawaiian government, which now found itself in possession of identical twin statues. But the statues weren’t identical. The replacement statue was pristine and resplendent with gold detailing. The original was missing a hand and had a broken spear, and had suffered a good deal of fire damage.

The government decided to erect the replacement statue in Honolulu and the original was restored and sent to Kapaau, near Kamehameha’s birthplace. However, the original was corroded from its time in the sea so, in the early 1900s, local residents began to paint the statue, both to prevent further corrosion and to make it more lifelike.

By the end of the century, the statue was in bad shape and in 1996 conservator Glenn Wharton was hired to assess its condition. In his book, The Painted King: Art, Activism, and Authenticity in Hawaii, he recalls being startled by what he found, ‘A larger-than-life brass figure painted over in brown, black, and yellow with “white toenails and fingernails and penetrating black eyes with small white brush strokes for highlights. . . . It looked more like a piece of folk art than a nineteenth-century heroic monument.”’

For the next few years Wharton led a community discussion about how to save the statue, including the tricky question of whether it should be restored to its original bronze and gold finish or continue the painted alternative the community had grown up with. In the end the community voted to keep the painted finish and in 2001 the statue was restored in this way and rededicated.

A third statue of King Kamehameha I was commissioned after statehood in 1959, for installation in the U.S. Statuary Hall in Washington DC. However, this statue wasn’t cast from the original molds, but from molds taken of the Honolulu statue.

Posted in response to this week’s Sunday Stills challenge on the theme of ‘Twin.’ See more responses here.