This week’s Sunday Stills challenge theme is ‘Bodies of Water.’ (See more responses here.) Last Sunday, I posted photos of the Kohala valleys. This week, I’m posting a bit about what goes on in them and elsewhere on the island.

The top photo is shows the mouth of the Waipi’o River looking back toward the cloud shrouded Kohala hills. The river, is fed by water passing over Hi’ilawe Falls and other waterfalls deep in the fingers of the valley. Like all water courses on the Big Island, its flow is greatly increased by the often heavy rainfall.

The second photo shows a waterfall, farther down the coast, cascading into a pool at the bottom before flowing out to the ocean. Some of these waterfalls drop more than a thousand feet. Some cascade into valleys, some directly into the ocean. During dry spells, the water flows are greatly reduced and many falls, those that are entirely rain fed, disappear for a while. When rains are heavy, the water flow is so great that some falls blend together to form a sheet of falling water.

On the east side of the island is Wailuku River, the longest river on the island. This flows down to the ocean in Hilo, and on its way, tumbles over the aptly named Rainbow Falls (third photo). The falls and rainbows are best seen in the early morning. This stretch of the river is very dangerous with flash floods being common. People get swept away here every year.

Pinkhead smartweed (Polygonum capitatum or Persicaria capitata) is a groundcover that hails from western China and the Himalayas. It’s variously known as pinkhead knotweed, pink knotweed, Japanese knotweed, pink-headed persicaria, or pink bubble persicaria. I use pinkhead smartweed for the very good reason that I like the name. It sounds like the name of someone pretentious, but slightly seedy, from the alleged upper crust of society.

In this bounty of names, a couple of elements stand out. One is ‘pink,’ the other is ‘weed.’ This is a very pink plant and, in Hawaii and elsewhere, an invasive weed. Drive eastbound over Saddle Road (officially Hawaii Route 200, the Daniel K. Inouye Highway) and, once you cross the saddle and begin your descent, this plant will become obvious very quickly. It lines the road on both sides for several miles with very little in the way of other plants competing for that space. This is because pinkhead smartweed will grow in poor ground and lava fields fit that description.

This is also a stretch of highway that, relatively recently, was converted from a narrow, winding road, that rental car companies routinely forbid their clients from driving on, to a wide, smooth thoroughfare, the only place on the island where you can legally go 60 mph, and where you can expect to receive a ticket if you go 80 mph like everybody else.

Redoing the road left verges of rock and gravel and very little else. Pinkhead smartweed was quick to move in and colonize this unpromising territory so that now the descent toward Hilo begins with pleasing pink borders.

The top photo shows the rugged kind of ground pinkhead smartweed can grow in. To the right, bees appreciate the flowers of this plant growing at an elevation over 5,000 feet. Below, the collapse of a lava tube has left a shady hole where pinkhead smartweed, an endemic amaumau fern, and an ohia tree have established a good foothold.

Boiling Pots is part of Hilo’s Wailuku River State Park. In this photo, the pots can just be made out through the tree in the center. It looks serene here, but it’s a dangerous spot. The river is prone to flash floods and when it’s roaring, the water in the pots looks like it’s boiling, hence the name. People have been sucked under and trapped in hidden caves and lava tubes. There are lots of warning signs, but many people still think they know better. Not all of them are right.

Tourism is Hawaii’s largest industry drawing between 850,000 to 1,180,000 visitors a month. The Big Island is the state’s largest geographically, bigger than all the other islands combined, but it ranks third, behind Oahu and Maui in the number of visitors. It logs 100,000-175,000 arrivals each month. Consider though that the island’s population is currently somewhere between 180,000 and 190,000. So at any given time tourists probably comprise a third to nearly a half of the people on the island.

So how do people here feel about tourism? Well, as you might expect, opinions vary. Those impacted negatively by tourism – crowded streets, no parking, noise, inconsiderate partiers – might favor curbs on the industry. Those who do well from it – restaurants, tour companies, hotels, car rentals – would like to see more done to boost the number of visitors.

I chose this photo for two reasons. The first is the subject of the photo, a cruise ship docked at Hilo. This ship visits Hilo every Tuesday, then continues on to Kailua Kona on Wednesday. It brings an influx of tourists on those two days, who fan out across the island, taking tours to various sights island-wide. It also considerably boosts the population of those two towns on those two days, such that I generally choose not to go there if I remember the cruise ship is in.

The second reason is that I work for a helicopter tour company on the island. (There are several here.) We take passengers over about half the island, primarily visiting Kilauea Volcano and the valleys and waterfalls of Kohala Mountains. It’s not cheap, it’s not a carbon-friendly activity and helicopters are loud. There are rules in place regarding the elevation of the flights and places that can be visited or should be avoided. Despite this there are people, particularly those close to or under the flight path, who would prefer there were no tour flights at all.

So do I think the sky above the Big Island should be thick with helicopters, or that cruise ships should be lining up to dock, or that the relatively small airports here should challenge O’Hare for landings and takeoffs? No. As with most things, finding a balance is the key. If you overload with tourists, the quality of their experience suffers along with the experience of people who live on the island. But put excessive barriers in the way and people stop coming, businesses close, people get laid off, the economy shrinks. It’s a fine balancing act, one that rarely pleases everyone. But at least here, if a person is feeling a bit out of sorts about these kinds of thing, it’s possible to take a cooler to the beach, chill out, and watch the sun slide into the ocean, putting on a show for tourists and locals alike.

An Indian blue peacock at Pana‘ewa Rainforest Zoo & Gardens. The blue is very eye-catching. I particularly like the expression of the bird in the lower photo. It looks like an angry punk rocker. 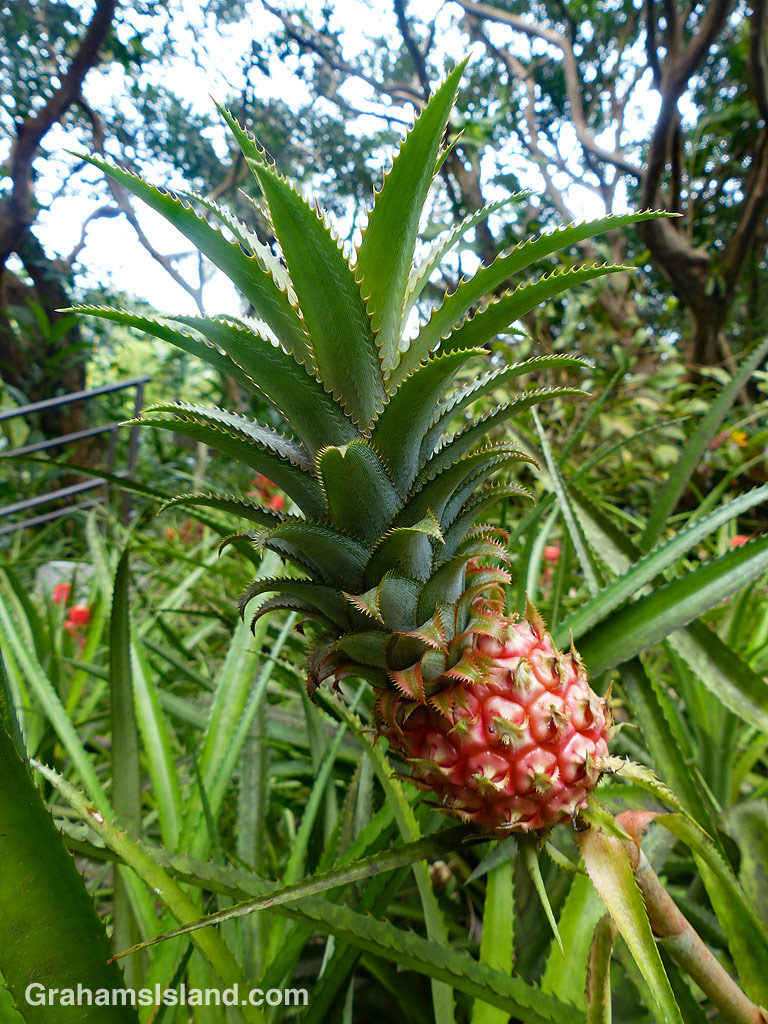 This little pineapple (Ananas nanus) is grown for its looks but is edible. With sharp spines on the leaves, it should be handled with care.

This one was at Hawaii Tropical Botanical Garden near Hilo. 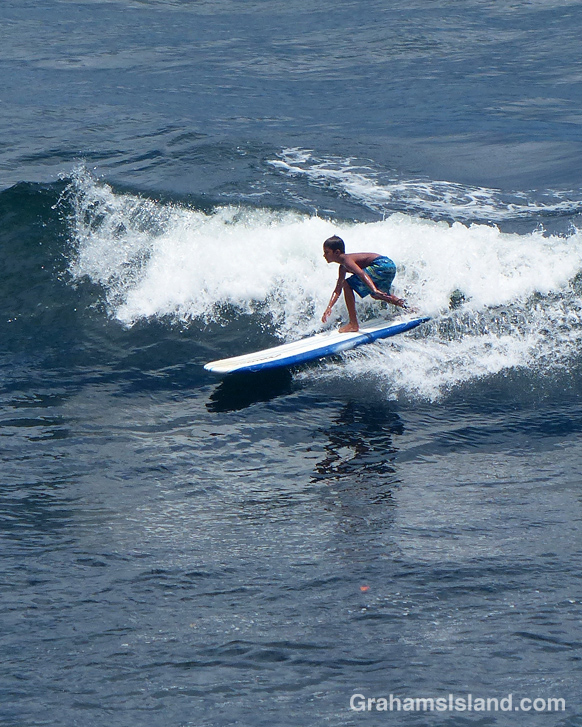 In response to this week’s Sunday Stills challenge on the theme of ‘Water’ (more responses here) I thought I’d post something very Hawaiian. Most widely-seen surfing images feature a surfer cruising through a barrel of blue water or sliding down the face of a terrifyingly steep wave. But many people enjoy getting out on the water and having fun on whatever waves are available.

The Big Island isn’t known for its surfing spots in the same way as Maui and Oahu, but there are still plenty of surfing enthusiasts. Good, rideable surf often leads to an increase in people calling in sick to work.

These photos were taken at Honolii Beach Park north of Hilo, a popular surfing spot on the east side of the island and a good spot for kids to get to grips with the sport.