This week’s Sunday Stills challenge theme is ‘Something Red.’ (See more offerings here.) I had a few bird photos that fell into that category, but I chose these yellow-billed cardinal photos for their name.

I thought this one, seen on the beach at Pololu, looked particularly dapper.

A while back, I exposed roosters (here) as the frauds they are when it comes to greeting the dawn. Yes, they crow at dawn, but only because they crow, randomly, 24/7.

But the dawn chorus is not a myth. It’s the time when birds that have managed to get a decent night’s sleep, despite the roosters, wake up and let other birds know that they made it through the night and this is still their territory. Around here, there’s both a great variety and large number of birds singing in the chorus, but the chorus leader is this bird.

At this time of year, this northern cardinal cranks it up around five in the morning. He’s almost always in this spot, high in a tree, about 60 feet from the house and, if I didn’t know better, I’d swear he has an amplifier and speakers up there, too. The northern cardinal has a loud and piercing voice, as well as a wide variety of songs to use it on. They include, ‘pichooey, pichooey, pichooey,’ ‘puertorico, puertorico, puertorico,’ and the ever popular ‘party, party, party, party.’

Sometimes, these calls get a response from another cardinal in the hedge about 10 feet from the bedroom window, which is startling to say the least, especially at that time in the morning when I’m not exactly at my best.

While I confess to having muttered a few less-than-complimentary words at the chorus, and this bird in particular, I’m grateful for the numbers and variety of birds around here. So I guess I wouldn’t have it any other way. And just lately, this cardinal hasn’t been on his appointed perch in the wee hours. I’m kind of worried. 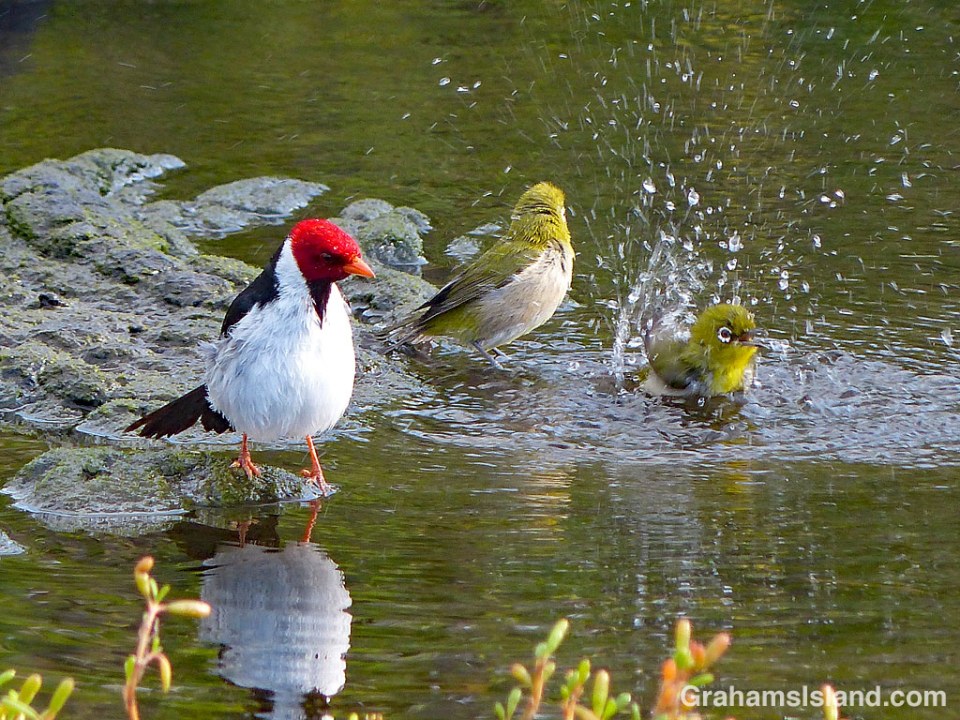 Two Japanese white-eyes and a yellow-billed cardinal take a dip in one of the ponds at Pu’uhonua o Hōnaunau National Historical Park, also known as Place of Refuge. The ponds are very popular with birds and it’s a good spot to sit and watch them for a while.

A northern cardinal stands over the remains of a mango, chewed over by one of the wild pigs, no doubt. 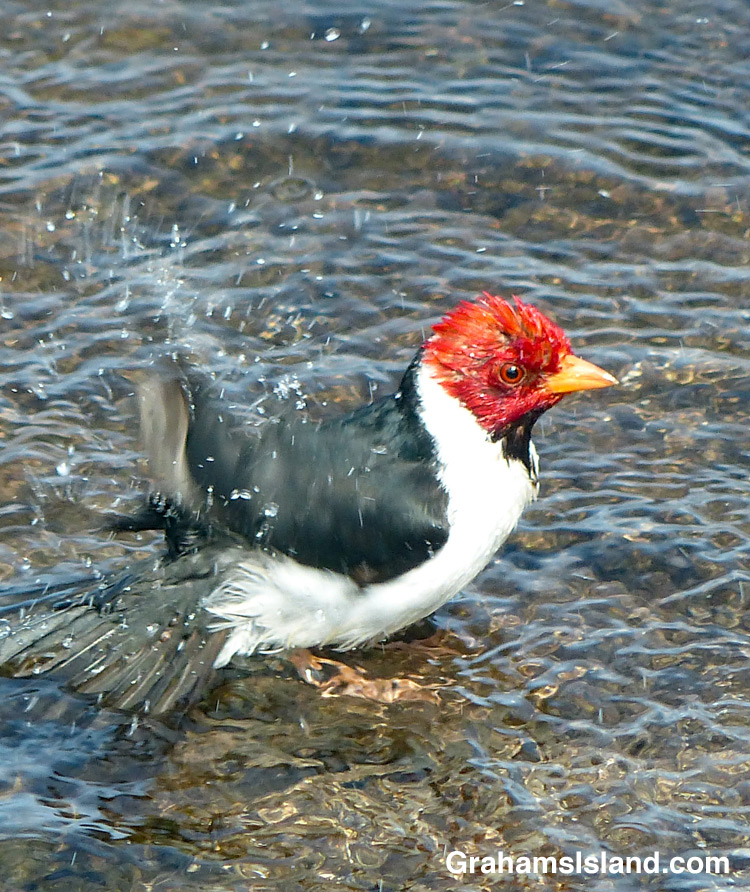 I got a good deal of satisfaction spotting, and photographing, this yellow-billed cardinal taking its morning bath. I guess that could be considered a bit creepy. Certainly, the bird’s expression in the bottom photo, just before it flew off, suggests it wasn’t best pleased by my presence.

Northern cardinals are an easy bird to identify, especially the males, which are a vibrant red. They are also distinctive in their calls, which are loud and varied. I know this because the pair that live near the house are among the first birds to rise and, around five in the morning, their calls cut through the relative quiet like tsunami warning sirens.

A South American bird, the yellow-billed cardinal was introduced to Hawaii and is quite common on the Big Island. I saw these two birds flitting through a stand of kiawes. The bird in the top photo was working hard on the bit of foliage in its beak. I assumed this was something for a nest, but didn’t see where the bird went. The second bird just hung out in the trees, possibly keeping watch.