For Bushboy’s Last on the Card challenge (see more responses here), I had to hunt a bit for the last photo I took. Turned out it was almost a week ago, when I was walking on the coast. The top photo is the last one, unedited. The one below is the next to last, cropped and edited a bit.

This was one of those occasions when I noticed the bird before it reached me, something of an uncommon occurrence in my experience.

In Hawaii, people spend a great deal of time outdoors. It’s common for people to have an outdoor kitchen, sometimes their only kitchen, sometimes a second one where a barbecue is the featured cooking apparatus. Carports often feature chairs and tables with cars parked elsewhere. The lanai, or deck, is as well-used as any room in the house.

Outdoor activities are popular here, too. Many involve the ocean and its inviting water: swimming, snorkeling, paddling, and of course surfing. Plenty of people go fishing and hunting, longtime sources of food for the table.

For me, experiencing the great outdoors primarily involves hiking and snorkeling. Hiking isn’t especially popular here, especially along the coast where it can get quite hot. I get strange looks when I hike the length of popular beaches togged out in hiking gear, including shoes, hat, and fanny pack loaded with water. For most, the beach is a place for stretching out and broiling in the sun, not actively working up a sweat.

The vast majority of photos on this blog are taken in the great outdoors. These photos are a small selection of things I’ve seen while out and about, from sweeping views to birds and bugs.

I saw these three great frigatebirds, stacked up like planes waiting for clearance to land. Not that I’ve ever seen one land. Great frigatebirds are one of those that spend a lot of time in the air, until they return to their roosts. Hawaii represents the northern edge of their range in the Pacific.

When Terri posts the Sunday Stills challenge themes for the month ahead, I usually check out what’s coming up. That way I can see what photos I have that fit the themes, or come up with ideas for what I could shoot.

When June’s themes were posted, my first thought for this one was of flying. Since the earliest of times, people have looked to the skies, watched birds, and envied their freedom of flight. Of the various birds I see here, the great frigatebird most epitomizes that freedom. These large birds cover great distances, gliding effortlessly across the sky, rarely flapping their wings but using the wind to maximum advantage.

I picked a couple of photos from my archives, expecting to use them since I hand’t seen any frigatebirds for many weeks. But a couple of days later, I saw one, though I didn’t get any good photos. That’s the other thing about these birds: they seem to have a knack for sneaking up on me, so that I usually notice them disappearing into the distance.

Over the next week or two, I saw a few more birds in similar situations. Then, one day, as I neared the coast below Upolu Airport, I saw a frigatebird flying into a strong wind. By the time I had my camera ready, it was again getting smaller. Still, I took photos and as I did so I saw a second bird, then a third. They continued heading east and I carried on down to the coast.

I hadn’t been there more than a couple of minutes when one of the birds shot by in front of me. It was pointing east, but heading north of west riding the stiff northeast trades that were blowing. A second followed, then a third, and a fourth that I hadn’t seen before. I expected them to quickly disappear on the wind, but once over the water, they regrouped and held their position, circling and gliding up and down. Then I noticed them edging back into and across the wind, heading my way. Slowly they came closer, still appearing to make little effort.

Eventually, the four of them passed directly overhead, the lowest maybe 20 feet above me. Almost immediately they turned and slipped back they way they came, only this time they kept going, gliding sideways in the general direction of Maui. I watched until I couldn’t see them anymore. The whole episode probably lasted no more than 15 minutes, but it seemed to last much longer.

I’m not much of a poetry buff, but these birds made me think of the opening lines of a poem called High Flight, written in 1941 by John Gillespie Magee Jr. when he was 19 and a pilot in the Royal Canadian Air Force, stationed in England. They read:
Oh! I have slipped the surly bonds of Earth
And danced the skies on laughter-silvered wings.

Birds were my first thought for this theme since I spend a fair amount of time gazing skyward, either looking for birds or following their flight. While I had several options of which birds to feature, great frigatebirds seemed an obvious choice for three reasons.

First, they fly with no apparent effort, using the wind currents to glide along, even into strong winds. Second, they’re big, imposing birds, which catch the eye as they soar overhead. And third, they are forever sneaking up on me, easing up from behind so that I don’t see them until they’re alongside, and by the time my camera is out, they’re disappearing into the distance.

Great frigatebirds are pretty easy to identify thanks to their size, their distinctive wing shape and their forked tails. The wickedly hooked beak is another distinctive feature. 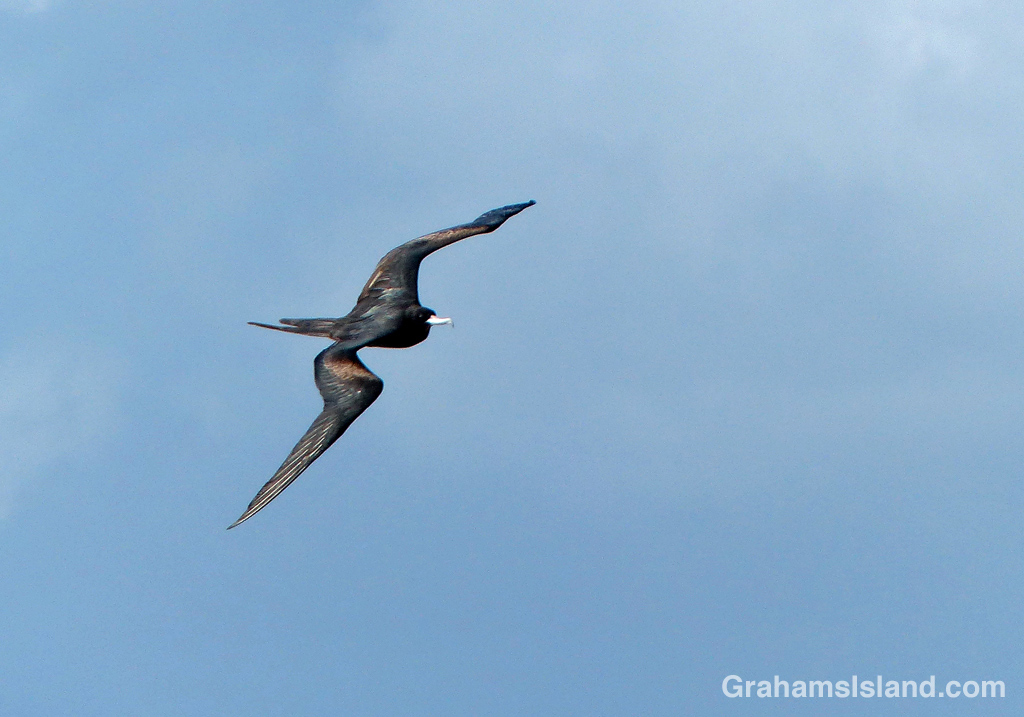 I often see great frigatebirds on my afternoon walks along the North Kohala coast. Usually, they’re coming from the west with the wind and sun at their backs. I rarely spot them until they’re passing me and by the time I’m organized, they’re disappearing into the distance.

My nadir in these encounters occurred recently. I was watching a turtle from the cliff when a large shadow passed over me, quite startling me. I looked up and around and a great frigatebird swooped by, maybe six feet directly overhead. My best chance for a close up zipped away into the distance, but I had to laugh. It was almost like a cartoon encounter.

This is a different bird, one I saw early enough to get a decent photo. 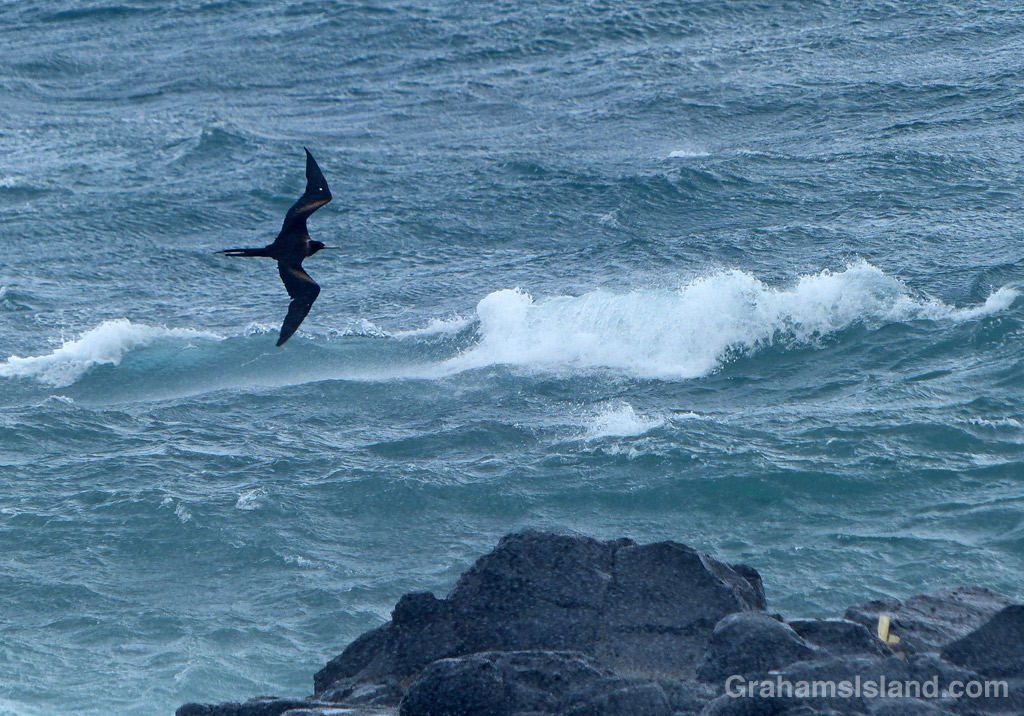 Tropical Storm Darby reached the Big Island yesterday. It was due to pass over this corner of the island during the night. The predicted track followed the north coast and since it was packing 60 knot winds on its approach, storm warnings were issued.

The power went out here Friday, getting the jump on the storm, but luckily it was just for an hour or so. Saturday dawned dark and windy with sudden, intense downpours, but in the early afternoon the weather broke for a short while and I went down to the coast to see how things looked. In truth, while it was very windy, it didn’t look that much worse than it often does around here.

On the way back from a short walk, some movement caught my eye. A large bird angling along the coast. Then another. In all, three great frigatebirds headed east, into the teeth of the storm. They made slow progress, sliding toward the coast, then away. Even though it was slow going, their progress looked effortless. They glided on the air currents, beating their wings only occasionally. The nice thing about their slow progress was that they remained in view for some time.

Returning home, the power was out again, but as the afternoon progressed the winds died to nothing (the storm had tracked farther south than anticipated). The early evening was tranquil enough that when I stepped outside, mosquitoes quickly buzzed around me. Mosquitoes do not do tropical storms.

Around 8:30 in the evening a decision needed to be made. Power had been out for seven hours or so and the contents of the refrigerator weren’t likely to last the night. It was time to pack the essentials into a cooler while trying not to lose whatever cold air survived in the fridge.

A smooth, military-style operation was worked out. Doors opened, items whisked from shelf to cooler, ice blocks rearranged. The operation was a success. I snapped the lid down on the cooler and the exact instant I did so, the microwave beeped and the power returned.