This week’s Sunday Stills challenge theme is ‘A Numbers Game.’ See more responses here. I put all my fingers and thumbs to work for my response, starting with ten Sheep in formation (and ten Cattle Egrets, too, as a bonus).

My last rainbow spans the main highway to North Kohala. This is a good spot to see rainbows in the afternoon. It’s cloudy and wet toward Kohala Mountain on the right, sunny and dry down by the coast on the left.

This phalaenopsis orchid falls somewhere in the violet/purple range. This was another instance where I looked up the official RGB color values for violet and found quite a range of possibilities.

The final photo has a Japanese white-eye sampling the good things on offer in a Japanese aloe flower, backed up by a bold and bright splash of violet bougainvillea flowers.

Almost all the birds I see in the backyard are fairly common, but no less interesting for that.

The top photo shows a Japanese white-eye chick clinging to a window screen. This was the first view I had of this bird, but from inside. When I went out to look there was quite a kerfuffle going on. The white-eyes were squawking in the bushes and flitting around.

After a while, the chick hopped off the screen onto the grass where the two parents, I presume, flew down to join it (middle photo). The squawking continued. Eventually the chick took to the air again and wobbled over to a nearby hedge where it clunked into the branches and gained a perch. The other white-eyes continued to flit around, making quite a din.

The chick moved a couple more times, tentatively, but must have landed somewhere safe because the hubbub subsided and calm returned to the yard. It must have been old enough to fly, but not yet adept at it so that it could control where the flight might take it.

In the bottom photo, taken while it was resting in the grass, the chick looks quite similar to the adults, but the signature white eye ring is not yet present.

This week’s Friendly Friday challenge theme is ‘Mood.’ See more responses here. For me, mood elevation often comes in the form of interactions with nature. Anything from bugs to birds, fish to flowers, can leave me in a better mood.

I had been watching Japanese white-eyes visiting Japanese aloe flowers on a daily basis. But I was really happy to capture one, perching on a stem, with purple bougainvilleas in the background. 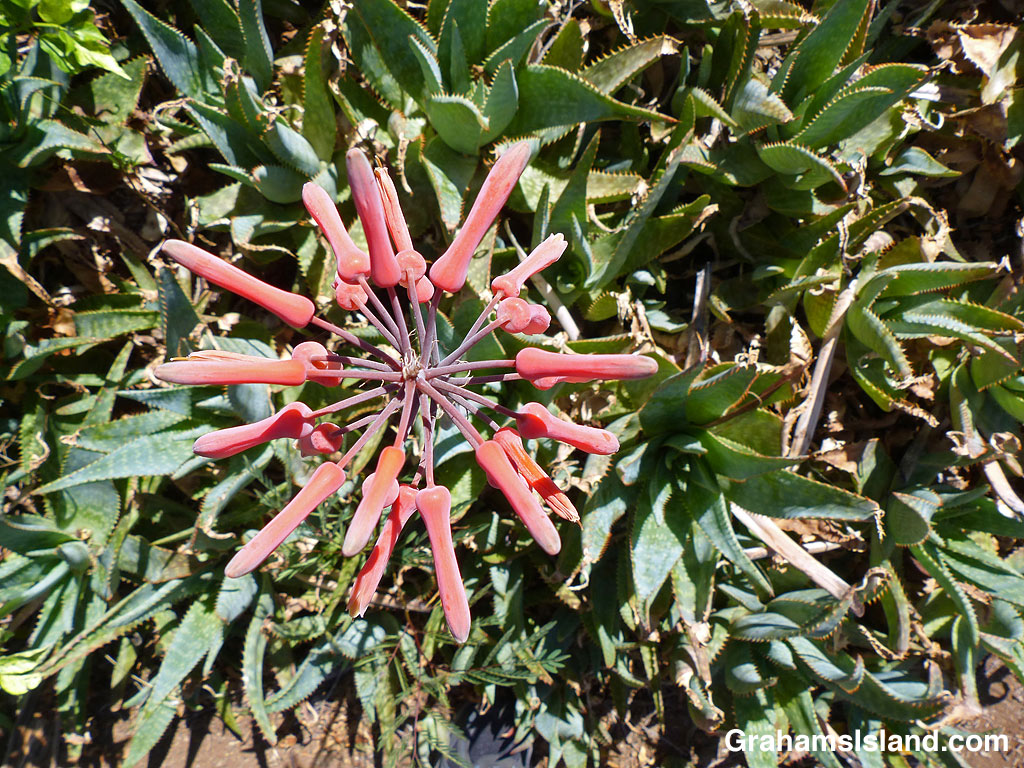 I think this is a Japanese aloe with its long tubular flowers and spiky leaves, though it could be a different variety. The flower stalks are quite long and reach well beyond the leaves, which makes things a little easier for this Japanese white-eye to feed from the flowers. 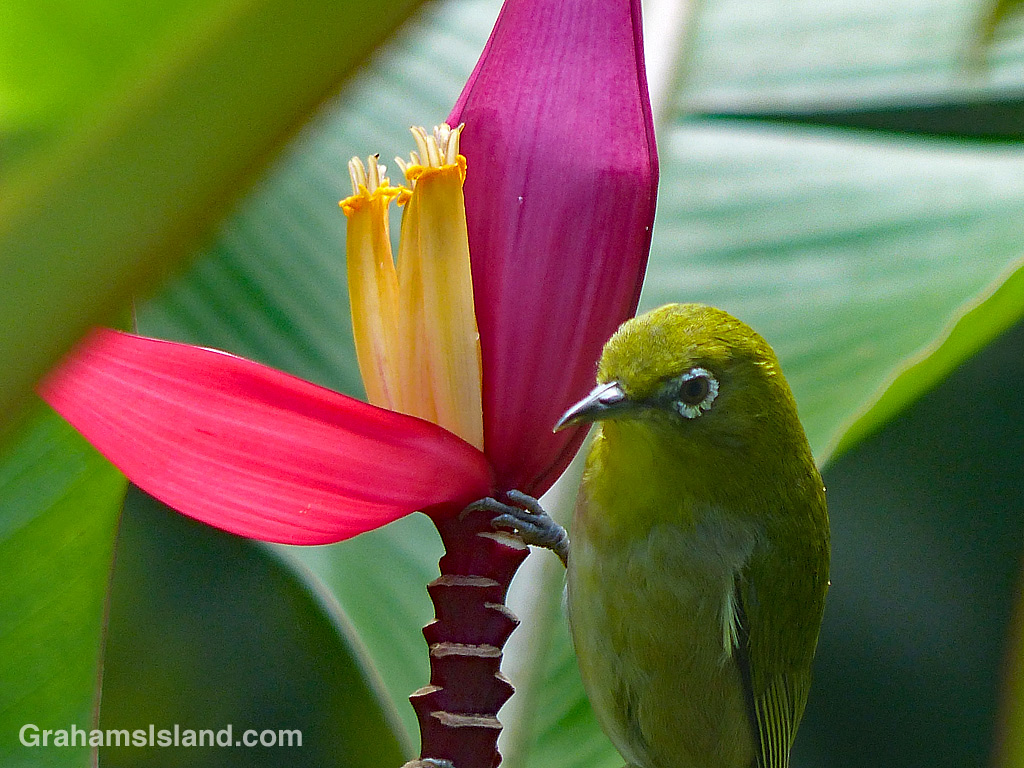 I was very pleased with this photo for several reasons. First is that I was lucky to notice the Japanese white-eye flitting through the foliage at all. Second is that I saw where it landed. Third is that I was able to focus in through a tangle of leaves and flowers. And fourth is that this is the only shot I got before it took off again. 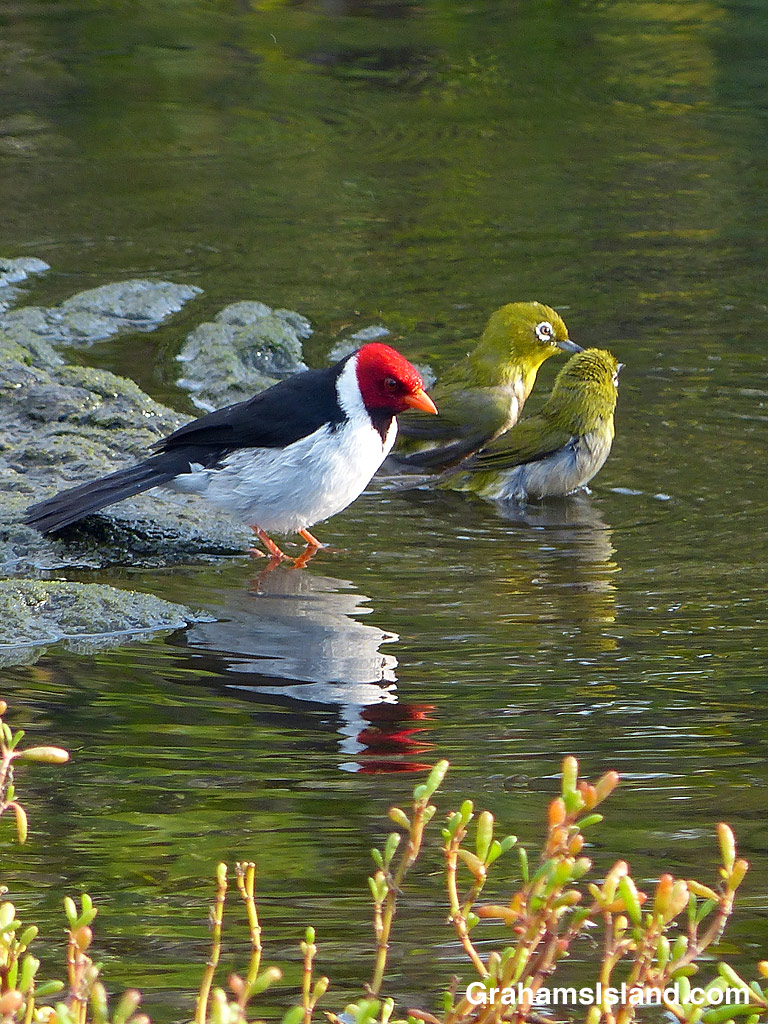 Two Japanese white-eyes and a yellow-billed cardinal take a dip in one of the ponds at Pu’uhonua o Hōnaunau National Historical Park, also known as Place of Refuge. The ponds are very popular with birds and it’s a good spot to sit and watch them for a while.